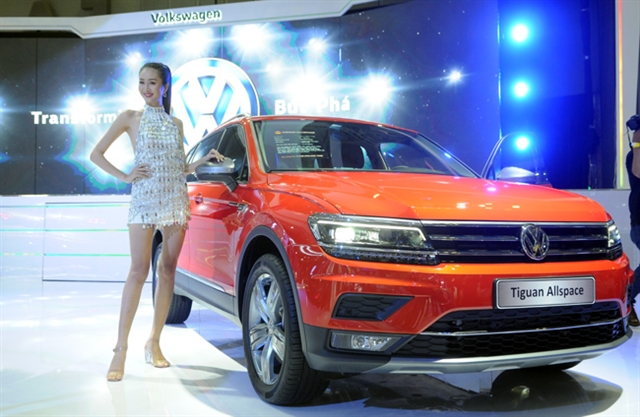 An imported car on display at the Vietnam Motor Show 2018. The domestic automobile market is expected to prosper in the last six months of the year and domestic automakers have the opportunity to develop. — VNA/VNS Photo Trần Việt

HÀ NỘI — Việt Nam imported more than 38,000 cars of various types, worth a total US$846 million, in the first six months of this year, decreasing by nearly 32,000 units in volume and VNĐ700 million in value year-on-year.

Insiders said that the main reason for this drop is due to the COVID-19 pandemic.

The market not only witnessed a drop in imported cars, but also components and auto parts. From the beginning of the year to June 15, the import turnover of this commodity group was only $1.44 billion, down nearly $400 million over the same period last year.

Prime Minister Nguyễn Xuân Phúc recently signed Decree 70/2020/NĐ-CP approving a cut of 50 per cent to the registration fee for buyers of domestically manufactured and assembled cars from now till the end of 2020.

From August 1, when the EVFTA officially comes into effect, cars imported from Europe will enjoy tax reductions following a roadmap. It is expected that the price of imported cars may decrease by hundreds of millions of đồng.

Insiders predicted the domestic automobile market will prosper in the last six months of the year and domestic automakers have the opportunity to develop as well as compete with imported cars. — VNS

Moody’s has announced to maintain the ratings of the Joint Stock Commercial Bank for Investment and Development of...

C.T. Group Honoured As One Of Best Companies To Work For In Asia

Property developer C.T. Group received the annual HR Asia Award for being one of the best companies to work for on t...

Vietnam Airlines Group will postpone its shareholders’ meeting until July 16, according to a decision signed by Ch...

Nutritional information and methods to improve health were discussed at a recent online sports nutrition training...