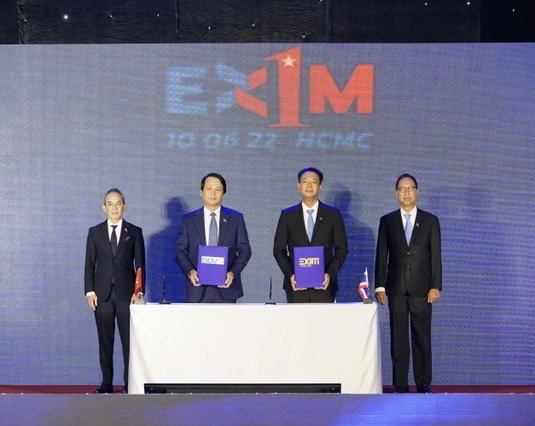 The Export-Import Bank of Thailand signs a credit facility with the Bank for Investment and Development of Việt Nam at the opening of its HCM City representative office on June 10. VNS Photo Thu Hằng

HCM CITY — The Export-Import Bank of Thailand has agreed to provide the Bank for Investment and Development of Việt Nam with a credit facility worth US$100 million to use as working capital and support Thai exports to Việt Nam.

The deal was signed during the opening of the Thai lender’s representative office in HCM City on June 10.

Under the agreement, the two sides will share information that will help enhance Thai-Vietnamese trade and investment and business between their entrepreneurs.

Speaking at the opening ceremony, Dr Rak Vorrakitpokatorn, EXIM president, said despite the uncertainties and challenges post-COVID there were still ample business opportunities.

His bank would be ready to take risks by supporting Thai businesses with both credit and insurance for international trade and investment and covering them against foreign exchange, trade and political risks, he said.

There were still plenty of new opportunities in Việt Nam for Thai businesses in view of its population of almost 100 million and average economic growth prospects of close to 7 per cent a year.

Minister of Finance Arkhom Termpittayapaisith, who presided over the opening ceremony online, said Việt Nam had a clear strategy to promote the use of renewable energy to bring about energy security and lessen dependence on fossil fuels for power generation, and had relaxed investment rules and was offering investors privileges, particularly taxation breaks.

It is the eighth largest foreign investor in Việt Nam. —VNS